CLICK ON THE TRACK NAME TO GO TO THAT SECTION

Airborne has its own page elsewhere. CLICK HERE to go there.

The track in Fort Covington was so close to the Canadian border that a few of the old hands  would exaggerate a bit and say one of the turns was actually in Canada. I don't think this is true. I have a Terraserver Satellite photo of the old layout which will make the location more correct; but, I don't a lot of pictures specific to Fort Covington. Many of the teams that ran Airborne or Saranac Lake would have run at Fort Covington, I suppose. It sits behind the Turning Leaf Quick Stop and Diner complex on Route 37, on the western edge of town.

Medor Viau on the track at Fort Covington. 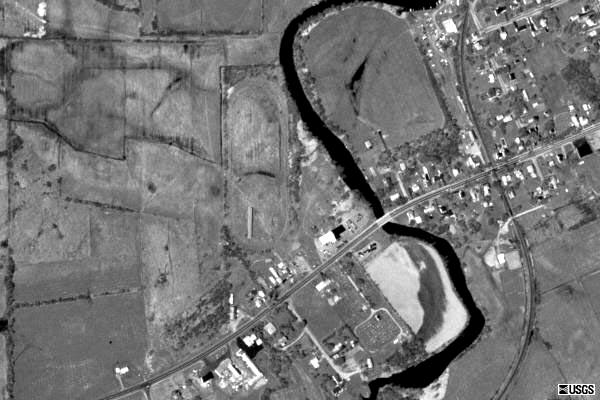 The Fort Covington track is located right in the middle of this shot, just below where the river [which is the international boundary]
starts to arc to the right. Notice the track IS quite close to that.

Terraserver USGS Topographical Map
The track is seen right under the Ft. in "Ft Covington". 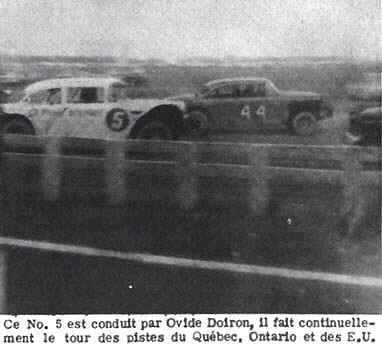 Future engine builder Ovide Doiron is on the Fort Covington track in what appears to be a late model race.

VESTIGES OF THE SITE

Found on Photo Bucket
An aerial view of the site with that long storage building visible.

The track now has its own page. CLICK HERE.

The track in Canton was very pivotal in the early development of stock car racing in New York. The separate page, accessible by the link just above, will tell more.

Historic Aerials.com
This slight outline of the track, as seen in a 1964 aerial photo, is all that has been found for photos this far.

The track in the town of Plattsburgh, north of the city has a number of newspaper articles but not photos have yet been found. Variously serving as a horse racing and training site, a temporary site for the Clinton County Fair, a track hosting motorcycle and open wheel cars, and lastly a stock car track that had the unfortunate fate of starting when the bigger and splashier Airborne track was also starting, the venue did not survive much beyond 1954 or 55. The area was taken overby exit 39 to Interstate 87 and by WPTZ Channel 5.

Courtesy of the Midstate Club

Return to the New York Tracks and Drivers Page

Return to the Main Page